Can you save the world with 50 cents? „Yes,“ says Joachim Gauck, „there is a woman who can.“ This woman’s name is Harriet Bruce-Annan, and yesterday the Federal President honored her with the Cross of Merit and singled her out. She stands out anyway with her hearty laugh, her white robe and her story, which did not begin in Africa, in her home country Ghana, but in Düsseldorf, in the old town, in a pub, or more precisely: in a toilet. 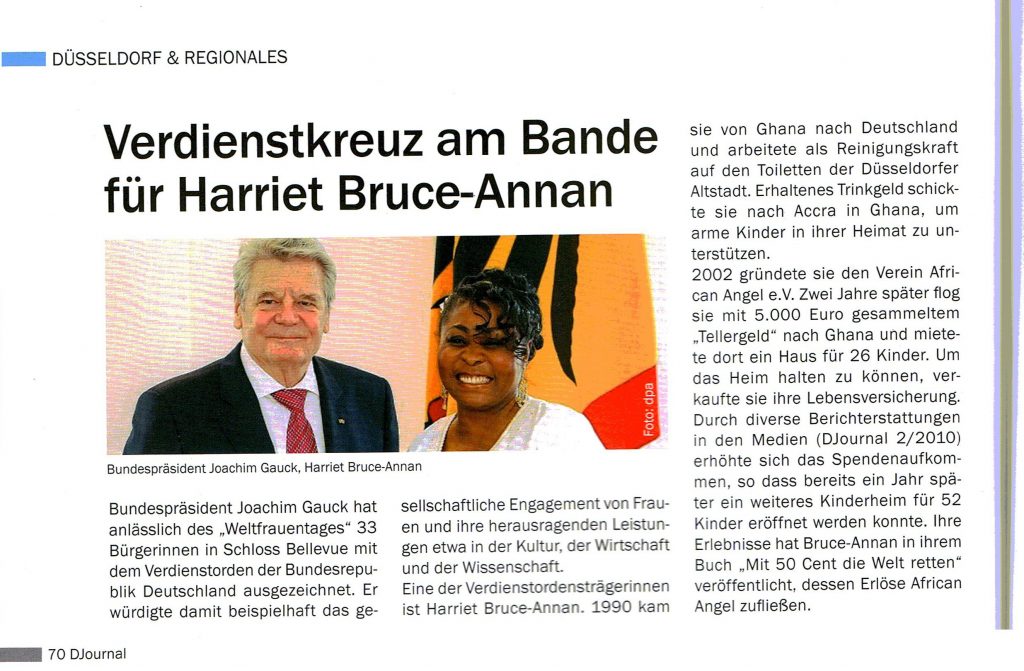 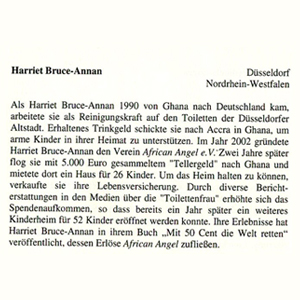 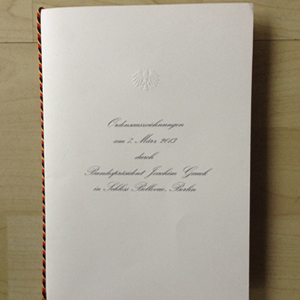 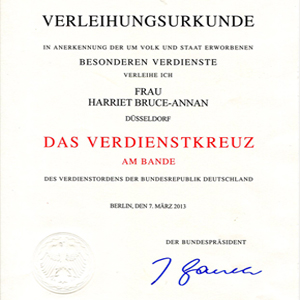 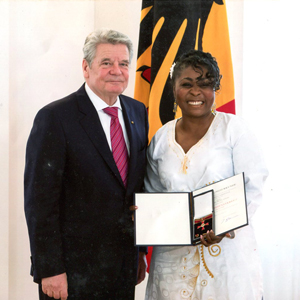 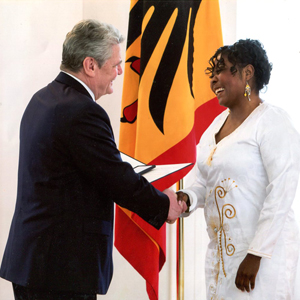 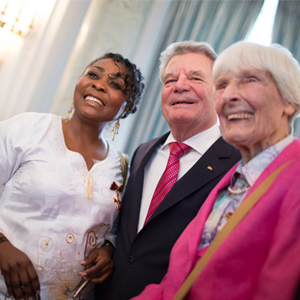 This is an award for women who live abroad but do something for their homeland. Nana Yaa Asantewaa (b. October 17, 1863; † October 17, 1921) was the Queen Mother of Edweso, a constituent state of the Ashanti Kingdom.She led the last great Ashanti uprising in 1900 against British rule over their country and what was then the Gold Coast, later Ghana.
This award was named after her: it is given to strong and courageous women. 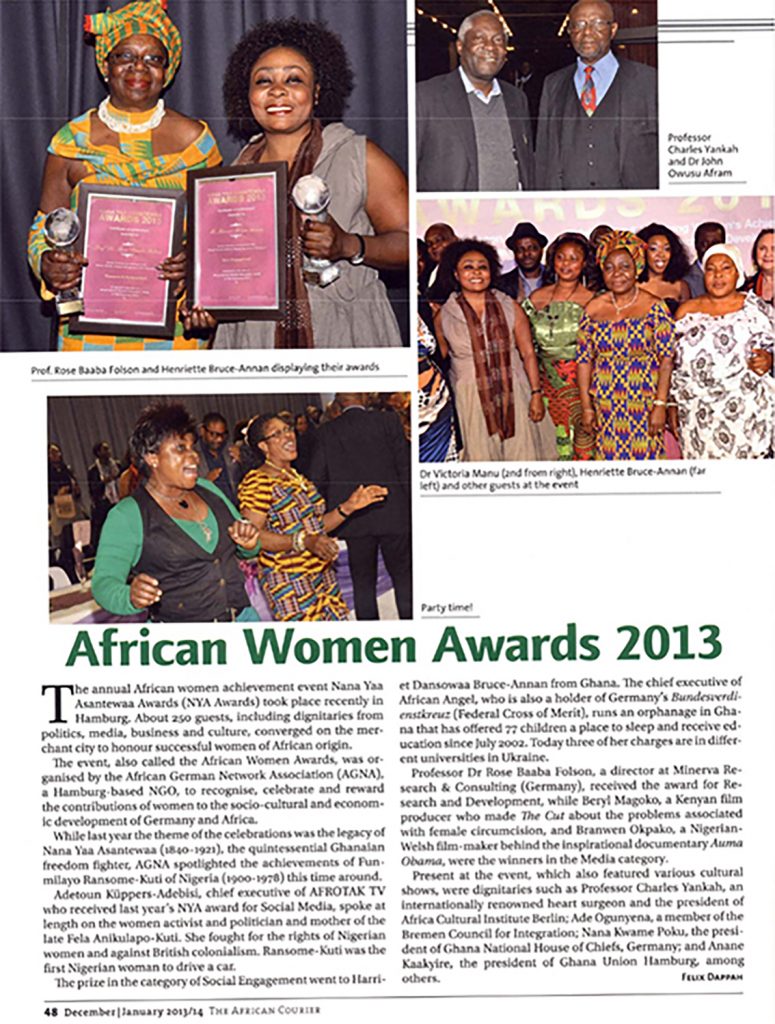 Bronze for African Angel and Ogilvy

At the POS Marketing Award 2012, in which internationally working agencies and the largest aid organizations (Global Players in Charity) participated, African Angel e.V. won the bronze medal with a campaign by the agency Ogilvy Düsseldorf, in which it was shown how to effectively generate donations and how the donations are targeted and successfully benefit the needy children in the world.

Düsseldorf. For the sixth year now, HSBC Trinkaus employees have voted in a fundraising campaign to support social projects in which employees are personally involved.

The projects are supported by the bank with donations totaling 55,000 euros. Andreas Schmitz, Spokesman of the Management Board, presented the donations, saying, „As a company, we are fortunate that our employees are willing to get involved.

We are very pleased and would like to thank the employees and the Executive Board of Trinkaus on behalf of our children for this generous support.

At a gala event in Berlin on March 31, 2011, Germany’s biggest women’s magazine honored five strong female personalities who fight with competence and passion for social projects they have set up.

In front of 500 invited guests, each of the award winners was introduced by a prominent godmother. Harriet’s godmother was Sabine Christiansen; the laudatory speech was given by Dana Schweiger, wife of Til Schweiger.
Each of the power women received 10,000 € for their project with the award of the GOLDEN PICTURE OF THE WOMAN.

As a surprise for Harriet, Veronica suddenly came on stage to present her with the GOLDEN PICTURE OF WOMAN. Veronica has been one of Harriet’s protégés in Accra for six years and had been secretly flown to Berlin.

The two greeted each other overjoyed and lay in each other’s arms for minutes. Veronica was accompanied by Mama Dora, who has been caring for the home children since their early days as Mama, and was able to greet Harriet at the end of the event.

However, these were not the only surprises the organizers had come up with. During a pre-reception, Bernard, Harriet’s son who is studying in Ukraine and with whom she had spoken on the phone just the day before, suddenly stood beside her. After a brief pause of disbelief, she embraced him with an exclamation of the greatest happiness. Again and again, the two embraced in exuberant joy at the unexpected reunion.

As the highlight of the evening, Ursula von der Leyen, Federal Minister of Labor and Social Affairs, announced that Harriet had won the additional Reader’s Prize, worth €30,000, from among the five prize winners.

In her speech, the Minister emphasized the importance of the prize: „Nothing has such a contagious effect as the good example. „The Golden Image of Woman lifts into the limelight what otherwise flourishes rather quietly in obscurity. I think that’s good.“

Under the long lasting applause of the audience, the Minister together with Marco Gottschalk, Manager Marketing Jacobs Krönung as donor of the prize money and Kai Pflaume as presenter, presented a huge check in the amount of 30000.- €.

Afterwards it did not hold also many spectators any longer on the seats. They pushed forward to congratulate Harriet. The two members of the board, Rainer Schüürmann and Hans Heitmeyer, as well as Marita Falk-Solheid, who had been instrumental in preparing the surprises, were among the first to join in.

The next morning, Mr. Sarpong, a diplomat at the Ghanaian Embassy and His Excellency the Ambassador of the Republic of Ghana in Germany came especially to the Hotel Großer Kurfürst to congratulate Harriet and have breakfast together with the surprise guests and African Angel members before leaving in a minibus towards Düsseldorf.

Thanks to all supporters
Harriet and we of the African Angel team feel a deep need to thank from the bottom of our hearts all those who made this sensational success possible. Many of our members, donors and supporters have voted for Harriet over and over again for months. They have promoted Harriet on every conceivable occasion, distributed information material and done educational work.

For this again a huge THANK YOU!!! 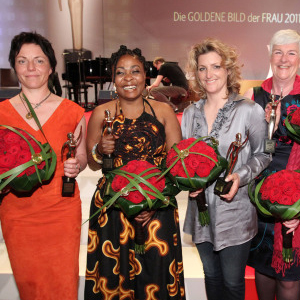 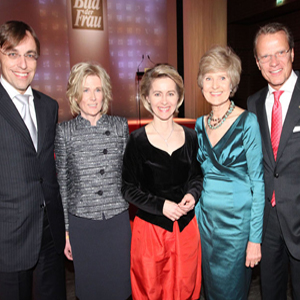 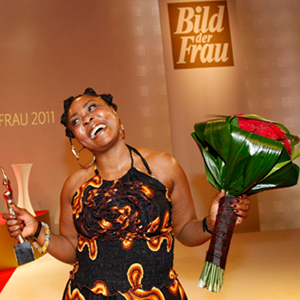 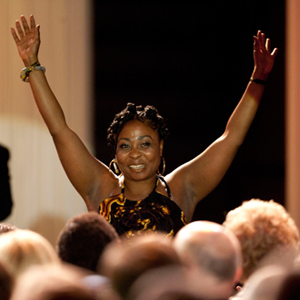 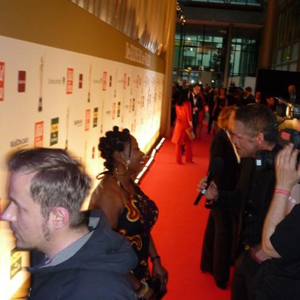 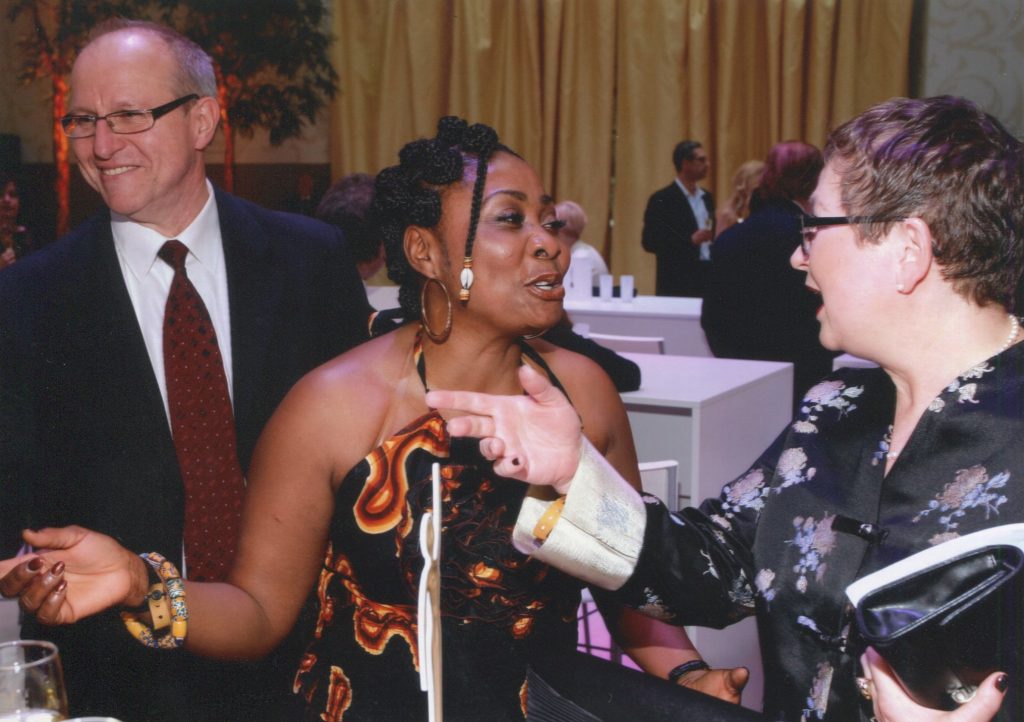 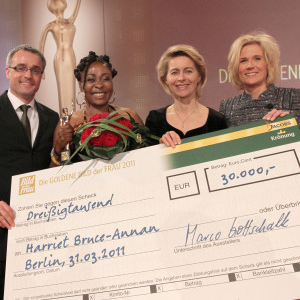 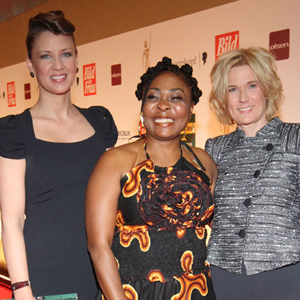 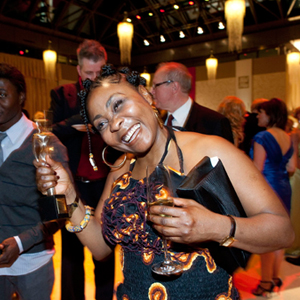 Harriet wins 1st prize in the Bild der Frau competition for „Strong Women. Strong country.“
Many celebrities are present and congratulate Harriet on this success. 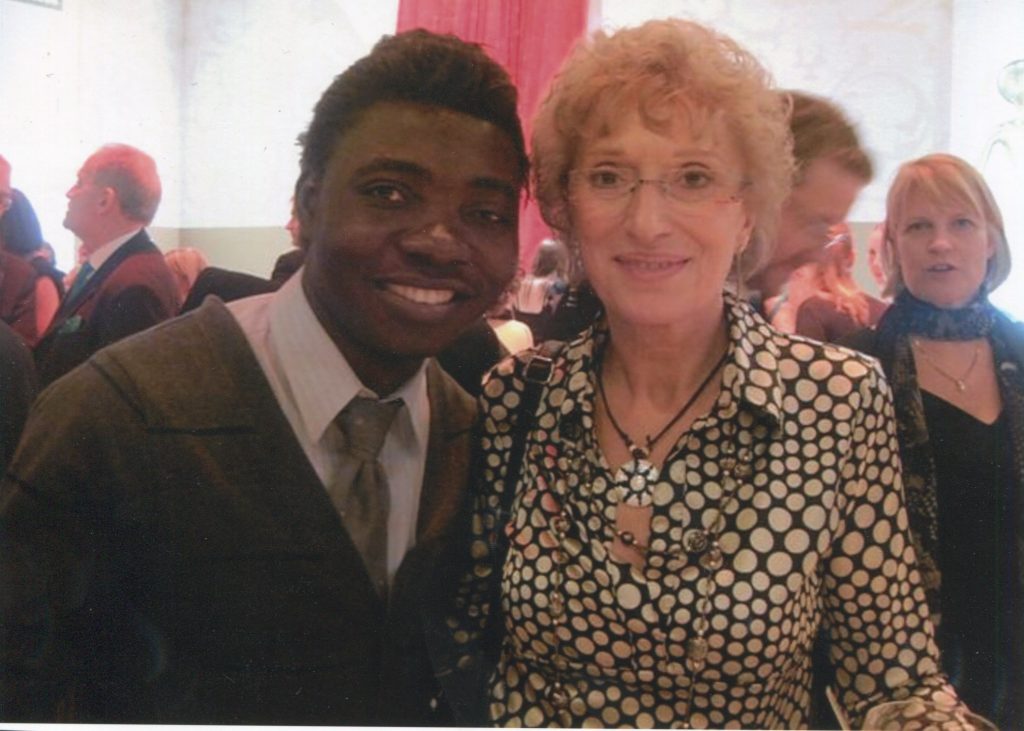 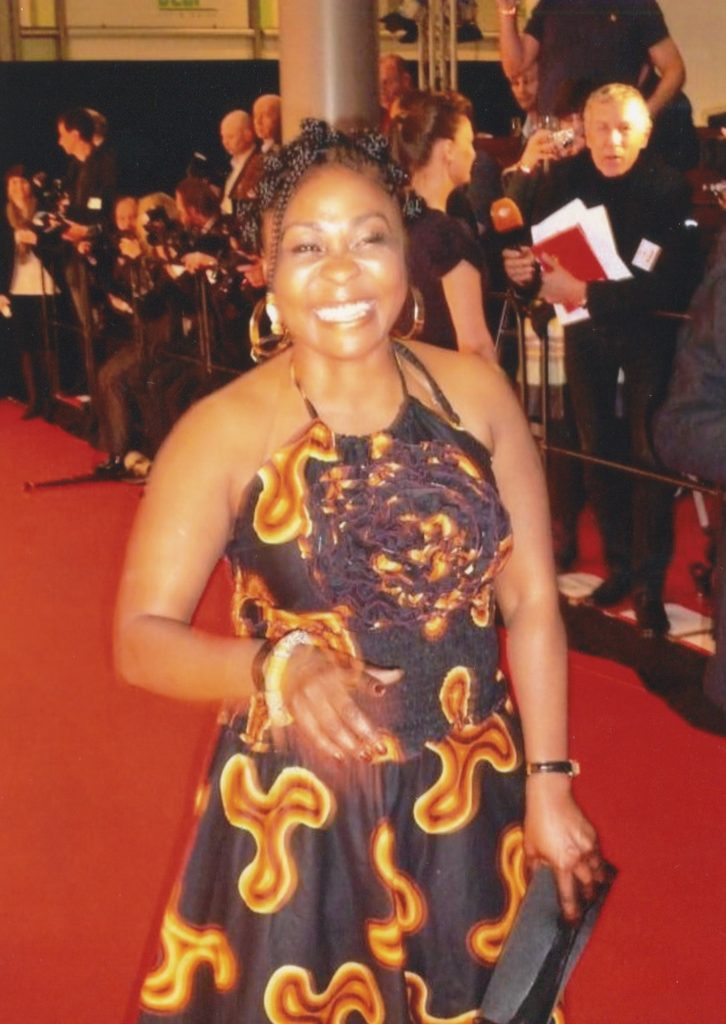 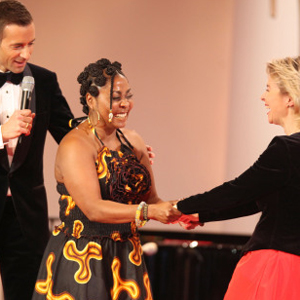 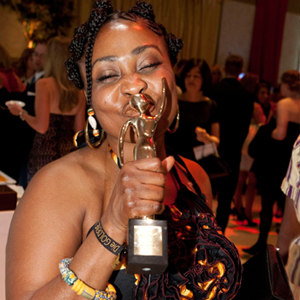 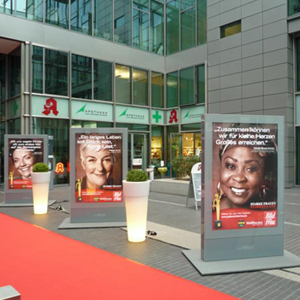 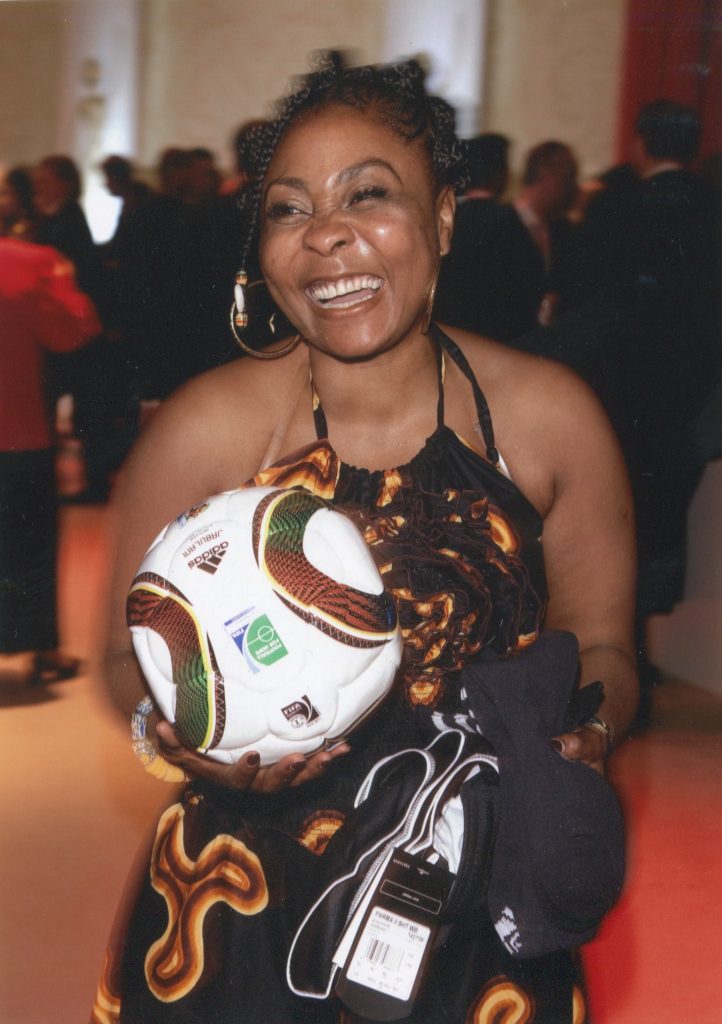 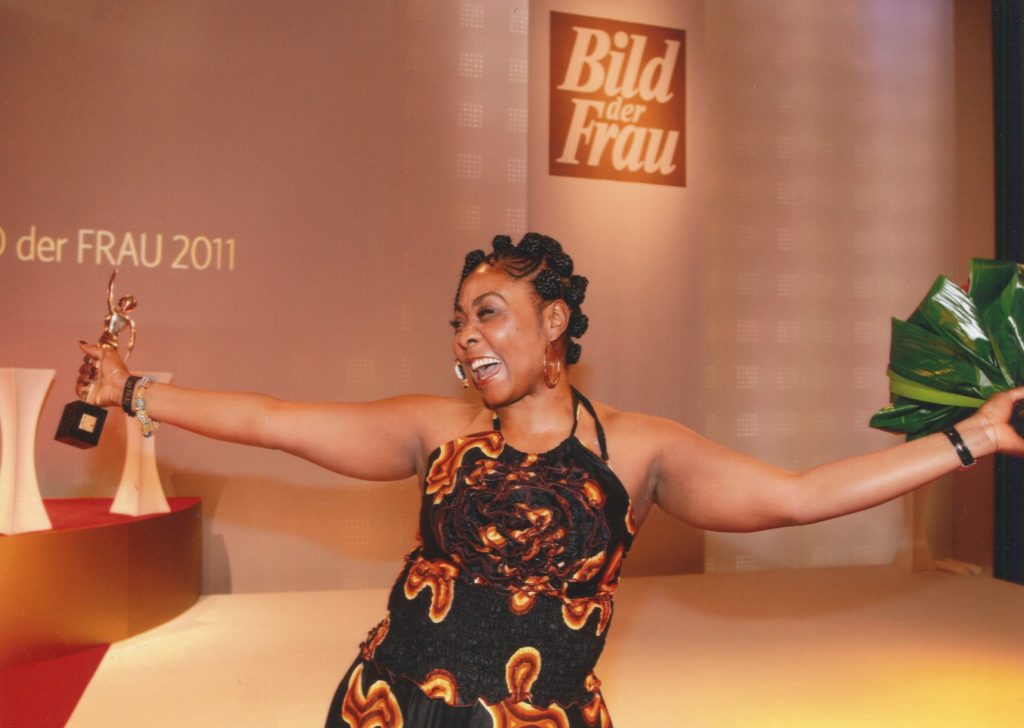 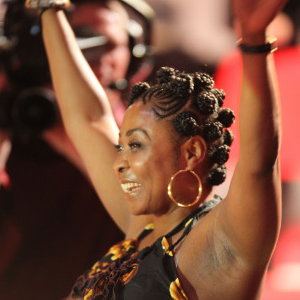 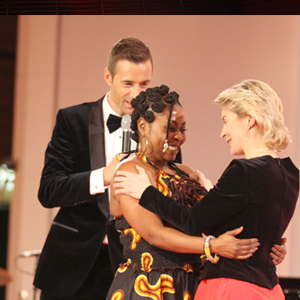 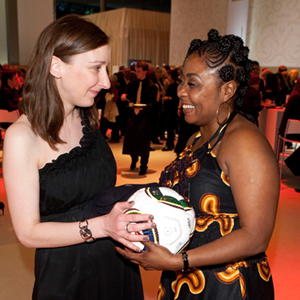 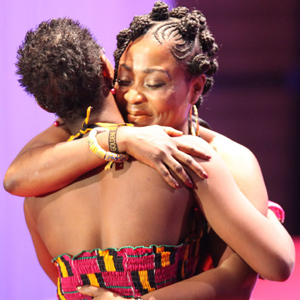 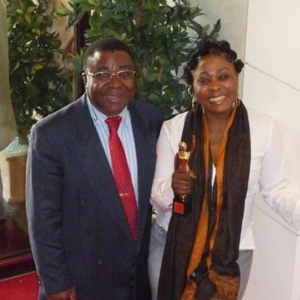 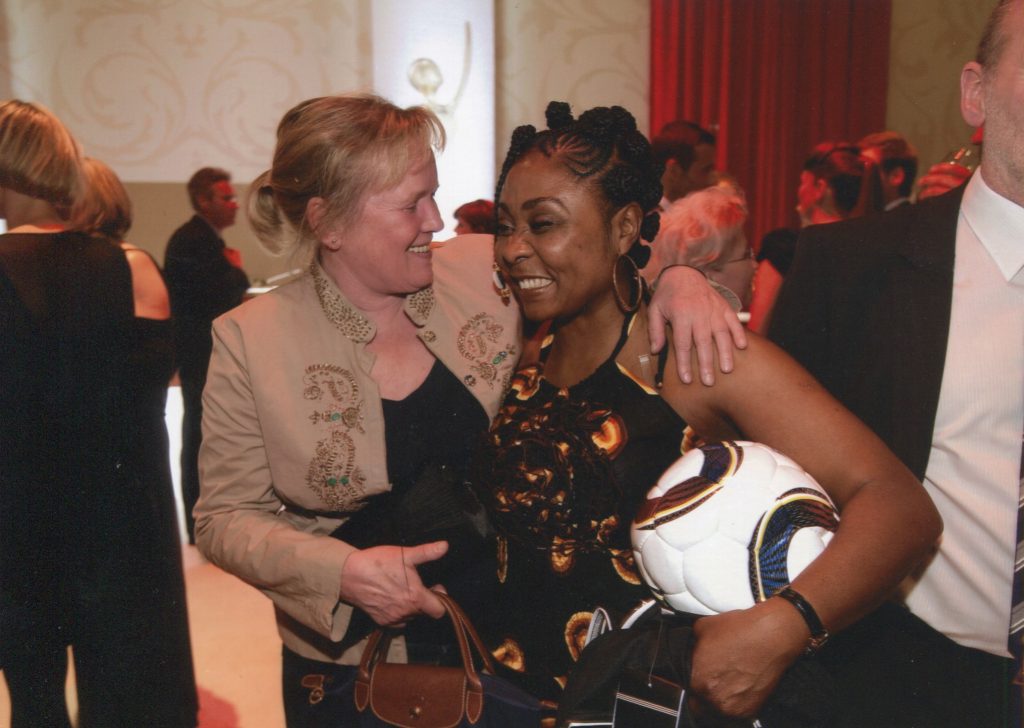 After the party is before the party. - Surprise guests from Ghana and Kiev.

The next day, after the award ceremony of the Golden Image of Woman, Image of Woman together with the board of African Angel had invited some as surprise guests.

Order of Courage 2010 in Bürstadt

Since 1983, the Bürstadter Carnevalsverein has awarded a special medal every year. The bearer of the order must have shown courage; he should come from public life, he could be an athlete or a politician, he could be known from television or be a journalist. The word „courage“ was paraphrased by Manfred Heil as „Courage“. So the name „Courage-Orden“ was created.

The Heimat- u. Carneval-Verein 1959 e.V. Bürstadt is proud to have found courageous personalities again and again from 1983 until today and to have kept up the tradition of awarding the Order.